We went one-on-one with the general manager of the season 2 World Series champion New York Knockers, poke_man. Here's what he had to say:

Describe what it feels like to take home your first World Series title in HBD?
After getting a 6 seed I was a little surprised. Especially how well I did in the first three rounds.

Was there a specific move or series of moves last season that you think had a direct impact in leading you to the title?
I didn't mess with the team factoganize put together. I actually only carried a 25 man roster through the playoffs.

You've made some changes to your pitching staff this offseason, specifically subtracting Jin-Che Katou and adding Jesse Stone and Rafael Cruz. Tell us how you see your rotation and bullpen shaking out.
We will have the same starting rotation minus Katou. Percival or Stone will slide into his spot. Palmeiro will remain our first choice out of the bullpen. We will ride him for as many innings as possible. Cruz will be a nice addition to the bullpen. I would have liked to have Katou but I got distracted in RL during resigning and lost him.

Do you foresee any of your prospects coming up and making an impact on your major league team this season?
Nope. Cupboard is pretty bare.

What would need to happen for your team to repeat as World Series champions in season 3?
This is baseball. The commish is trying to get a divisional opponent to jinx himself. With that being said , we have 25 major league type guys in the organization. I would like to get into the playoffs with these same 25 guys.

Lastly, if you were calling plays for the Seattle Seahawks offense during the Super Bowl, what would you have done on that final set of downs?
I would have done the same thing they did. But, I would have told my defense to not jump offside after the turnover and went for a safety. This way poke_man would have won his Superbowl square. I just needed Seattle to score a safety. I thought I had it.
Posted by Kyle Mulligan at 2:51 AM No comments:

We went one-on-one with the general manager of the season 1 World Series champion Syracuse Squires, profgreen. Here's what he had to say:

Describe what it feels like to take home the inaugural World Series Championship in Knuckleball?
It was painful in the wallet that's for sure. With 3 max contract guys on the payroll, I had to win a WS or it would have been a disappointment.

Tell us what happened in the top of the ninth in that Game 7?
That was an unbelievable way to end a World Series. To be honest, it's still a blur... My bats came alive against one of the best RP staffs in the league with Foster, Yoshii and Palmeiro. The MVP for my team in the playoffs was Rafael Cruz - a guy who hadn't had a save opportunity in the regular season but was lights out as the closer in the playoffs. My strategy of resting my guys down the stretch cost me a 1st round bye so my pitching staff really came up big for me.

You broke open the wallet this past off-season to acquire star 1B Cesar Gonzalez, giving him a max contract. If he doesn't hit another homerun for your team, would you consider that signing worth it now that he's helped you win a World Series?
I have no regrets signing Cesar - I couldn't have started out that strongly in the regular season without his bat. His postseason was horrendous, though! But I'll take 45+ HR with 130 RBI all the way to the bank on him. He'll prob be a little overpaid as a 35 year old in a few seasons but he'll continue to drive in runs with the guys he has ahead of him.

King Cesar wasn't your only big acquisition. A mid-season trade saw your bring in Ivy Woods for some of your top pitching prospects. Talk about that trade and the decision making process involved there and how you felt about giving up those prospects.
Giving up 23 & 26 year old very good SPs was a gamble I had to take. My offense came into shape but I was a SP away and Wood filled that void. I lost out on him in FA so it was nice that I got the opportunity to trade for him.

What's your strategy to defend your World Series championship, heading into the off-season?
This offseason may lighten my wallet even more. I'm still looking for a #3 SP and a stronger bullpen but I'm very happy with my offense. My defense isn't where I'd like it to be, so I'll be looking to upgrade there.
Posted by Kyle Mulligan at 2:09 AM No comments:

In yesterday's (8.6.14) PM game, The Houston Colt .45s demolished the depleted bullpen of the New York Greys in a 28-4 rout.  Although some of the carnage came against tired pitchers, the Colt .45s had their way with the Greys' first 4 pitchers.  Ivan Javier headlined the barrage going 6 for 7 with 6 runs scored, 9 RBIs, 4 homeruns, and 1 walk.  Karim Donald also added 2 homeruns of his own.  Through 25 games, Javier is leading the league in batting average (.380) and OBP (.485).  New York will be looking forward to their next off day and some much needed rest. 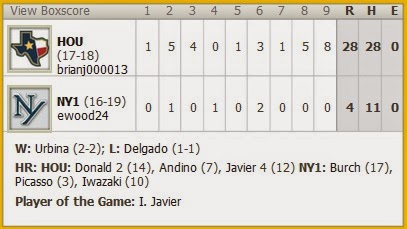